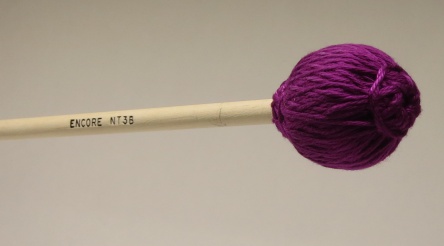 The Naoko Takada Concerto Series was designed in cooperation with internationally acclaimed marimba artist Naoko Takada, for marimbists desiring extra articulation and projection while maintaining the richness and full fundamental sound of a latex wrapped core. Encore’s hand-wrapped latex cores allow the creation of a surprisingly hard and clear sounding mallet without the addition of harsh overtones which usually accompany a mallet of that hardness. These mallets are harder, heavier, and brighter than both the NZ and NM Series mallets, making them particularly well suited for ensemble playing. Medium hard, with birch shafts.

Naoko Takada was born in Todyo, Japan. She has appeared as a soloist with many orchestras including Houston Symphony, China National Symphony Orchestra, Fargo-Moorhead Symphony, SanAngelo Symphony, DuPage Symphony, Tokyo Symphony Orchestra, Tokyo Chamber Orchestra and Xalapa Symphony (Mexico). As an exchange student she studied with Karen Ervin-Pershing at California State University, Northridge (CSUN). After graduating from CSUN she earned her MM at Ithaca College under the instruction of Gordon Stout. She received an assistantship at Ithaca where she was given the opportunity to teach a percussion course, fulfilled her dream of becoming a teacher. After completing her MM at Itahca, Takada studied with Nancy Zeltsman in Boston.